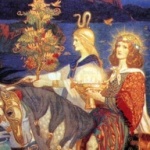 It is said that when the fairy race of the Tuatha dé Danann, children of the goddess Danu, arrived in Ireland they came like a mist across the waters- bringing with them magical gifts.

The first generation of the Tuatha dé Danann had to fight off the giant races of the Firbolgs and the Formorians.

The Formorians were a semi-divine race said to have inhabited Ireland in the ancient times. It is believed that they are the beings who preceded the gods, similar to the Greek Titans; having the body of a man and the head of a goat (according to 11th century text), or to have had one eye, one arm and one leg.

The Tuatha dé Danann’s chief of the gods, the Dagda, (father figure and protector of the tribe) was known to have a cauldron (which was said to restore life) and a harp- battle scarred and made of oak.

When his men went to battle, the Dagda would set up his magic harp and sweep his hand across the strings.  A war song would ring out making his warriors buckle his armor; brace his knees and shout, “Forth the fight!” When the men returned, weary and wounded, the Dagda would take his harp and strike a few chords- as the magic music stole out upon the air, every man forgot his weariness and his wounds and thought of the honor he won, and the comrade who had died beside him and the safety of his wife and children.

The Harp of the Dagda

So it was that after the second battle of Mag Tuiread (Moytura), the Dagda discovered that his harp, together with his harper, had been captured by the Formorians and taken with them in their flight.  Angered beyond measure, he set out with his son to reclaim it.

Stealthily they approached the Formorian camp.  Soon they could hear the sounds of the feasting hall in which Bres, the Formorian king, was dining.  Approaching the doorway, they could just make out through the smoke and candle-flame the outline of the old harp hanging on the wall.  Dagda entered boldly and summoned his harp with this chant:

Immediately the old harp flew to his hand across the hall, killing nine men as it came.  A shocked hush fell on the company.  In the silence, Dagda laid his hands on the strings and unleashed the Three Noble Strains of Ireland that he had bound into his harp.  First he played the goltrai, or strain of weeping, so that all present began to mourn and lament their defeat.  Then he played the geantrai, the strain of merriment, so that the company turned to laughter and drunken foolery.  Lastly he played the suantrai, or sleep-strain, whereupon the warriors fell into a profound slumber.  After this the Dagda and his son left the camp as quietly as they had come, taking the harp and harpist with them.

The Tuatha dé Danann were the children of the great goddess Danu and are depicted as magical fairy people who were later overrun by the Milesians who allowed them to reside underground in the sidhe, or fairy mounds.  In folk belief the sidhe are often appeased with offerings and care is taken to avoid angering or insulting them.  Often they are not named directly, but spoken of as “The Good Neighbors”, “The Fair Folk”, or simply, “The Folk”.  They are generally described as stunningly beautiful, but can also be terrible and hideous.

🐛 For Caterpillars Seeking The Butterfly Within 🦋

A Heap of Broken Images

thoughts from my mind to yours

Pain goes in, love comes out.

Your Feelings, My Sketches

Words of Wonder, Worry and Whimsy